In the 'Flemish Garden' not only Dutch Protestants were buried, but also from other countries in Europe. The first burial would have taken place in 1881. The location chosen for the cemetery was on the east side of the river Meles, between the water and the railway that opened there in 1866. The bridge that crossed the Meles was called Kemer Köprüsü (Belt or Band Bridge), but also called Karavan Köprüsü, after the caravans that entered the city here from the east. On the southwest side of the bridge lay also a large cemetery. The city did not extend that far at the time and the natural heights were ideal for the construction of cemeteries when the older cemeteries in the city gradually disappeared. In 1922 the battle around the mainly Greek city caused a lot of damage and after the conquest by Turkish troops the city changed radically. Many Greeks left Izmir, often forcibly, but European powers retained their commercial interests, churches and buildings here, provided they had survived the great cityfire of 1922. The trade rights were even laid down in the Turkish-Greek peace treaty that was signed in 1923.

In 1924 the last burial would have taken place at the cemetery. There are no photos, the location can only be found on maps and city plans. As the city continued to grow, the cemeteries became completely enclosed by buildings and roads. In 1950 Izmir had more than 225,000 inhabitants, but by 1965 that had already grown to more than 440,000 inhabitants. This was mainly a result of the influx from eastern Turkey. Many poor inhabitants of the eastern provinces moved to the west of Turkey, because the standard of living there was a lot higher. Eventually, the entire strip of cemeteries along the Meles disappeared and was built over. The city of Izmir is still building new cemeteries, some of which are now more than 15 kilometers from the old city.

In 1965, then honorary consul Hendrik F.G.M. Dutilh (1929-) decided to transfer the stones from the Flemish garden to the old cemetery that still exists. In this way, Dutilh hoped to protect the stones from vandalism. A bricked-in stone in the old cemetery commemorates this event and mentions seventeen tombstones. The Dutilh family, for several generations in Izmir, buried its dead earlier in the old cemetery, witnessing some tombstones with their names on them. It seems that among the seventeen stones from the Flemish garden there were also some stones from the Dutilh family. Later in the twentieth century, deceased relatives were buried in the Christian cemetery in Karabağlar, south of Izmir along the road to Gazimir. 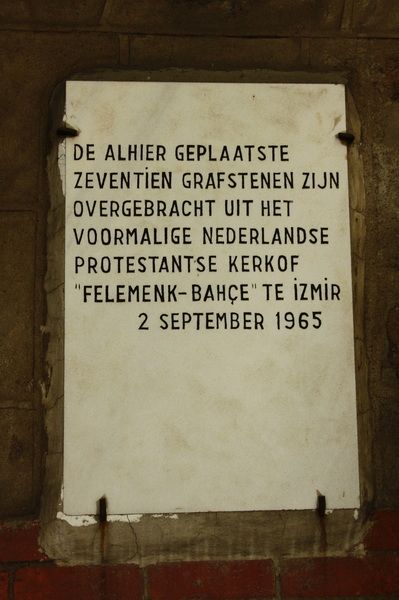 One of the stones that has been transferred from the Flemish garden to here concerns Louis Lewis le Bouvier, who died in 1924. He was chaplain of the Protestant church in Izmir from 1882 to 1924. His monument is a roughly carved marble stand with a carved text plate on the front. An even more beautifully decorated funerary monument is for Anders Persson Selander Brandt from Sweden, who died in 1918. The language on these somewhat younger stones is mainly in French and a few in English. Sadly, it is apparent that the stones have not been handled gently, because parts of many funerary monuments are missing.