For more than 200 years, from 1604 to 1825, India played an important role in Dutch trade. However, the Dutch presence in India does not stand alone. The Dutch East India Company (VOC) secured a place in a trading network around the Indian Ocean that had existed for centuries, in which the Portuguese had already preceded them from Europe. Spices on the Indonesian archipelago were the centre of Dutch trade, with Batavia, today's Jakarta as the administrative centre. Textiles from India facilitated the VOC's access to the spice trade and thus the Asian network. The spices could be exchanged for Chinese silk, the Chinese silk was exchanged for Japanese bullion, which was exchanged for Indian textiles. Other trade products were found as well, such as ray skin from India that was traded to the Japanese. The Dutch thus conquered a prominent place in the Southeast Asian market.

Dirck Gerritsz. Pomp from Enkhuizen was probably the first Dutchman in India in 1568, as he was also the first to visit China and Japan. Jan Huygen van Linschoten worked from 1581 on as secretary to the Portuguese archbishop in Goa. In his book Itinerario, published in 1596, he described the sailing route to India and the many products that were available. In 1604, Steven van der Hagen was the first to conclude an agreement in India on behalf of the VOC, with the Zamorin of Calicut. After that, the VOC soon opened several trading posts, called factories, some of which developed into fortified settlements with fortresses and garrisons. Elsewhere, the factory consisted only of an office with warehouses, as in Surat. Sometimes Portuguese were driven out of their fortifications, such as in Fort Kochi and Nagapattinam.

In India, the VOC had to deal with various rulers. To the north was the great Mughal Empire, and to the south were the Deccan sultanates and several small Hindu empires. The Dutch had to build up a trade relationship with each of them, in some cases offering military support as well, so a close, but above all practical relationship was created. Sometimes not only trade was conducted, but also small wars were fought. All this to maintain and strengthen its own position. To make optimal use of the network of trading posts in India, five factories developed into headquarters to manage the region: Surat, Malabar, Ceylon, Coromandel and Bengal. The relevant region was managed from each of the headquarters. Sometimes factories within a region alternated as headquarters, depending on local circumstances. 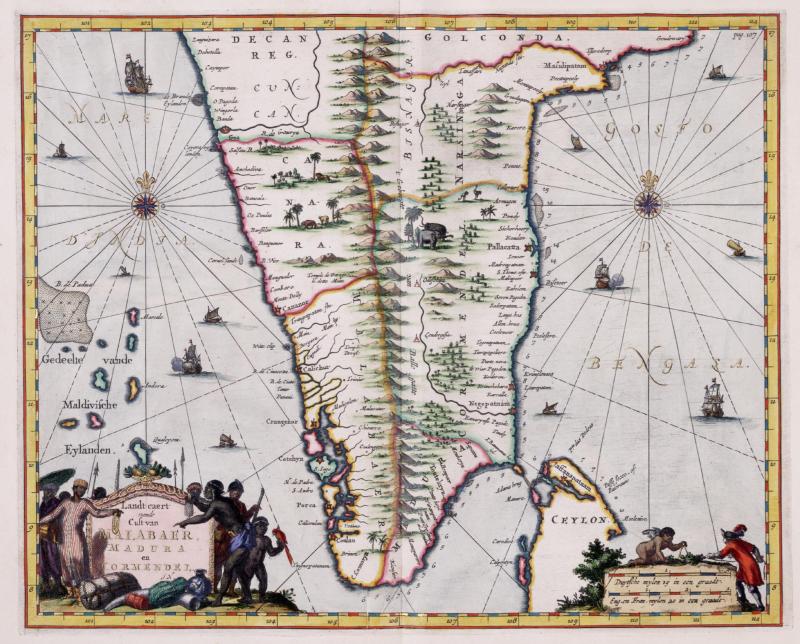 The Coromandel was the main producer of plain and luxury textiles, while Surat and Bengal gave access to the interior of Hindustan, the region of northern India. In the early eighteenth century, Bengal became an important centre of trade with textiles, saltpetre, opium and cheap raw silk. Malabar and Ceylon continued to concentrate mainly on the trade in spices, especially pepper and cinnamon. While Colombo on Ceylon grew into an administrative centre, like Batavia, the other locations in India remained centres of trade.

After 1750 the role of the VOC gradually diminished. Bureaucracy and the associated costs and corruption weighed heavily on profits. Moreover, the focus of trade shifted more and more to the Indonesian archipelago. During the Fourth Anglo-Dutch War (1780-1784) and the French period in the Netherlands (1795-1813) the English already took over the Dutch factories in India. Ultimately, the Netherlands transferred all its branches in India to the English in 1825 by the Anglo-Dutch Treaty of 1824. It is known that some Dutch stayed to live in India as their lives were intertwined with the country.

Much of the heritage built by the Dutch has disappeared over the years. Existing heritage is threatened in many places. Sometimes it is protected by the Archaeological Survey of India (ASI) and listed as Monument of National Importance, otherwise by the local government. For example, the Binnenkerkhof in Pulicat is protected by the ASI, as is Fort Sadras with the cemetery located within the fort. Other cemeteries are not protected and are managed by the owner, in several cases the local church. When it is no longer an apparent owner, the heritage is in danger of disappearing, as has happened with several cemeteries over time. In many cases, buildings have replaced the cemeteries. Sometimes remains are found in the form of a few tombstones. In a few cases, however, there is nothing left to be found. 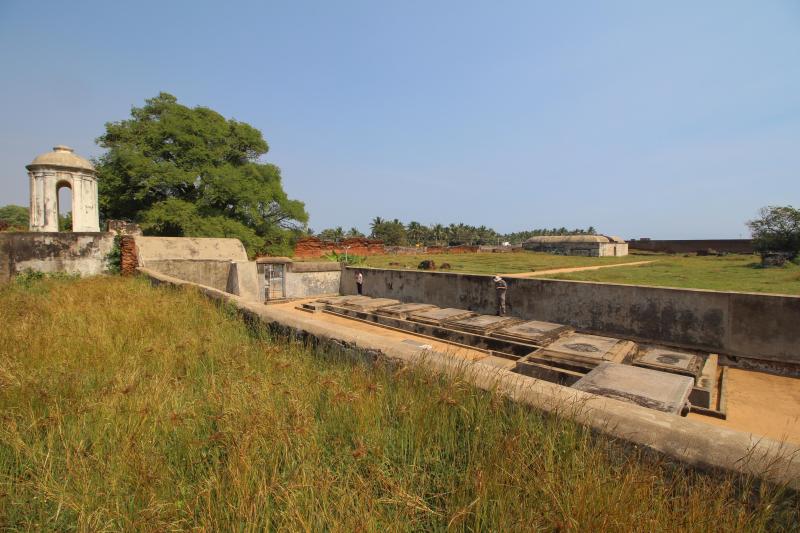 The aim of the Shared Cemeteries Project is to map existing and known disappeared Dutch funerary heritage in India. Existing cemeteries with their special funerary monuments such as in Surat, Fort Kochi, Nagapattinam and Pulicat are a prime example of how Indian and Dutch culture have influenced and strengthened each other for 200 years. It is therefore valuable to preserve and investigate these cemeteries. As a bridge to a shared past.

In general terms, several types of cemeteries can be named. First, there is the Garden. As part of the factory there was often a large and extensive garden in use. Not only for relaxation, but also as a signal to the local ruler to show the Dutch prosperity. In many cases, burials were also carried out in the garden. This is how the first Dutch cemeteries were created. In some places the current name still refers to this custom, such as in Masulipatnam, where the cemetery is called "Walandapalem", or "Hollanders Land". When the mortality among the Dutch was high (as was usually the case) and the staffing of the local trading post increased, a cemetery was often created outside the factory and outside the built-up area. The Dutch cemetery in Chhapra is an example of this. Unfortunately, today there is only one Dutch funerary monument left, while almost all other funerary monuments have disappeared. Other cemeteries are reconstructed, like in Masulipatnam. 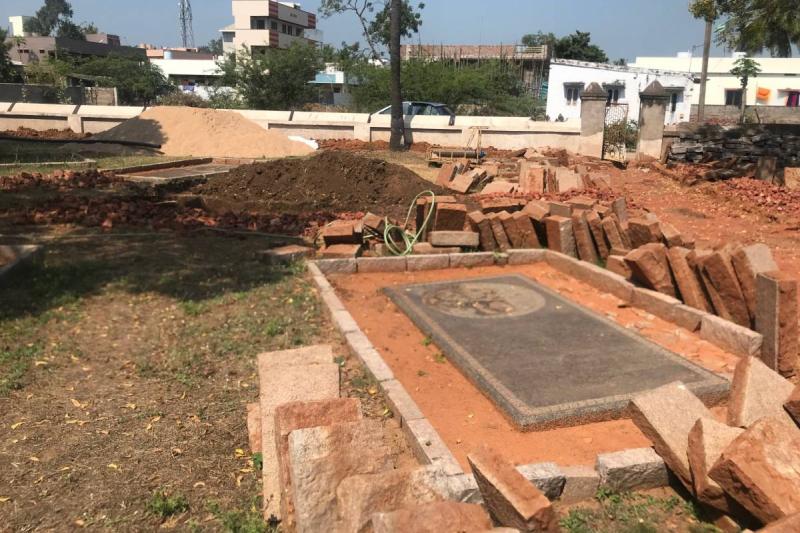 It also happened that burials took place within the fort. That could be within the fort itself or within the fortification. Both the Binnenkerkhof in Pulicat and Fort Sadras are examples of this. The originally Portuguese cemetery in Pulicat, the so-called Buitenkerkhof, is, as the name implies, outside the fortification. In some cases, burials were also carried out in the church, as was customary in the Netherlands at the time. The most famous example of this is the St Francis Church in Fort Kochi. The tombstones are no longer on the floor and are bricked into the side walls and pillars of the church.

In some cases, it happens that Dutch people were buried in other cemeteries or elsewhere. The grave monuments of John Hessing in Agra, a red sandstone copy of the Taj Mahal, and Eustachius de Lannoy in Fort Udayagir are examples of this. However, both were no longer employed by the VOC at the time of their death and served local rulers. It should be noted that De Lannoy was actually French by birth, but as so many nationalities who were employed by the VOC considered as Dutch.

The Dutch used different spellings and names for place names and regions. For Quilon, for example, Coilan, Coylan, Koijlang and Kollam. And for Cochin, for example, Cochijn, Couchim, Coutheim, Coxijn, Koetsjen, Koetsjiem and Kochi. For the website we have tried to use the names that are most common or under which the relevant cemetery is known. However, progressive insight can lead to adjustments and suggestions are of course welcome.