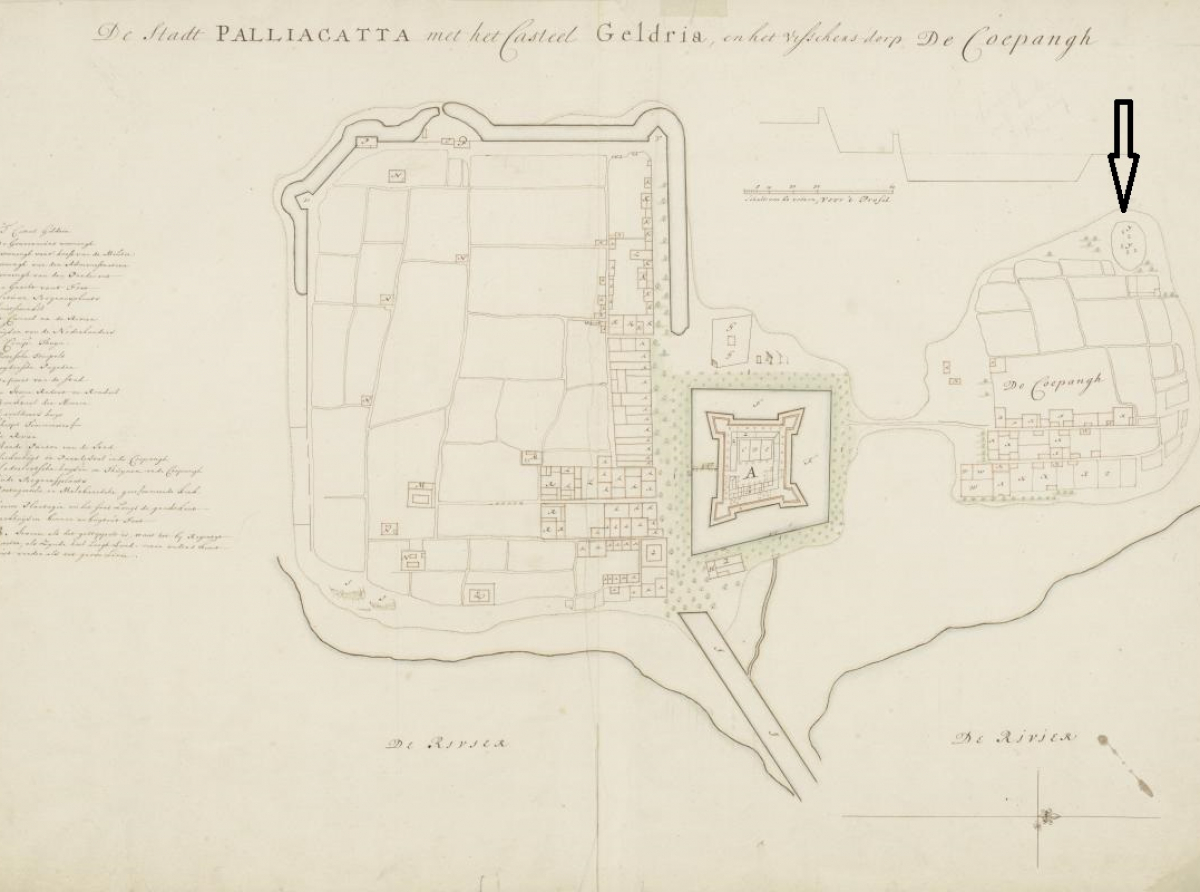 Due to Pulicat's importance as a transit port, it was frequently visited by foreign merchants. The first Muslims, mostly traders, came to the Coromandel in the seventh century, fleeing from the Middle East where they did not accept the reigning caliphate. The first Europeans, Portuguese, came to the Coromandel in the sixteenth century and established a trading post in 1502 in Pulicat, at that time an important transit port to Vijayanagara, the capital of the Vijayanagara Empire. The production and export of textiles and cotton yarn were the largest sources of income. After a war in 1565 between the Vijayanagara Empire and the Deccan sultanates, Vijayanagara was no longer the capital and Pulicat lost its function as a major transit port to Masulipatnam further north, which was closer to the new capital Golconda.

It was also in Masulipatnam where the VOC signed an agreement with the local Muslim rulers. The VOC recognized that the textiles from the Coromandel were needed to trade with the Moluccas for their spices. In 1609 the Dutch first visited Pulicat in search of fresh water. The Muslims helped the Dutch obtain permission from the king of the Vijayanagara Empire to set up a trading post. That worked, the VOC got the exclusive rights, and the Portuguese were forced to leave. As a result, the Portuguese quickly realized that the Dutch were a major threat to their own position on the Coromandel. In 1613 the VOC had a fort built, called Gelria, to strengthen their position in Pulicat and on the Coromandel. Not long after, not only cotton was sold, but also enslaved people.[1] 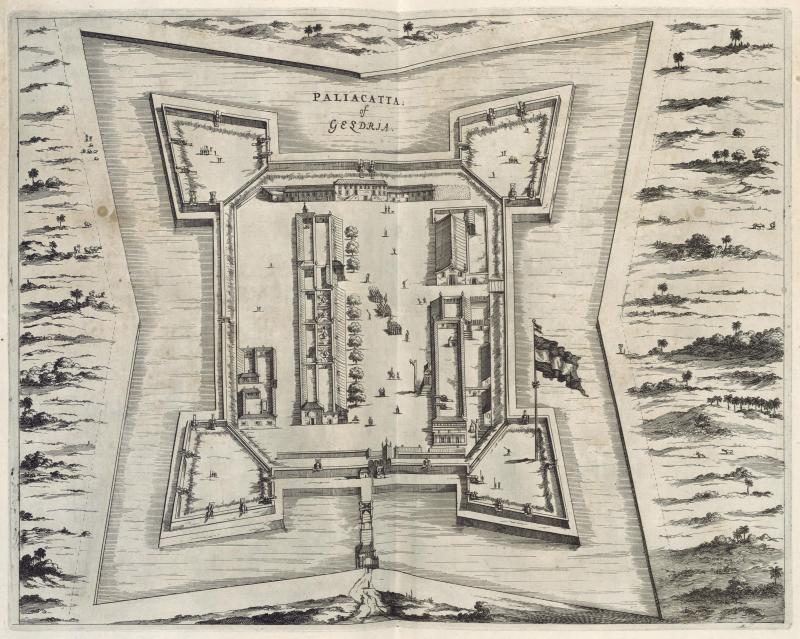 Despite several attempts, the Portuguese failed to take the fort. The British also tried in vain to gain a foothold in Pulicat. Their trading post, founded in 1619, was short-lived. A few years earlier, in 1616, Pulicat had already become the VOC headquarters on the Coromandel. Factories were then set up in Nagapattinam, Porto Novo, Devanampattinam, Sadras, Golconda, Palakollu, Daazerom and Bimlipattinam. Pulicat remained the headquarters until 1689, when the governor moved his seat to Nagapattinam. This lasted until 1781, when the British conquered Nagapattinam and Pulicat became the headquarters again, but the power of the VOC was already waning by then.

Around 1795 the factory in Pulicat was destroyed by Muslim troops. British troops took over Pulicat after the Netherlands itself had come under French influence and it was not until the nineteenth century that the Dutch got their property back from the English. These were finally handed over to the British in 1825. The fort already had been demolished by the British before.

The first cemetery was originally outside the fortification, on the island of De Coopehang or Coebangh. Unlike the Binnenkerkhof (‘inner churchyard’), which was built later next to the fort. [2] It is also called the Portuguese cemetery, which seems to indicate that it was put into use by the Portuguese. The name Buitenkerkhof (‘outer churchyard’) also indicates that it was located "outside", so we can assume that it was not inside the fortification.

Nearby was the Portuguese church, which has recently been demolished and replaced by a new church building. The cemetery is owned by the church. A little further is the small St. Anthony's church, which is said to have been built by the Dutch in the seventeenth century.[3] 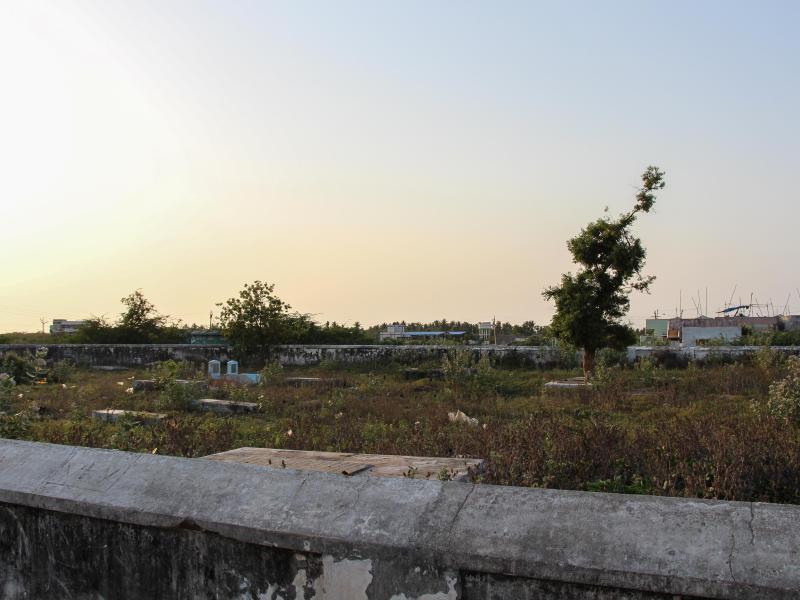 It is not known when the first cemetery came into use. The oldest burial monument found is not Portuguese, but Dutch and dates from 1631. [4] The Buitenkerkhof has been forgotten for a long time and was completely overgrown with bushes. Until shortly after the turn of the century Hans Schiebroek had the cemetery cleaned and the surrounding wall repaired. A new fence was installed with a reference to the VOC. 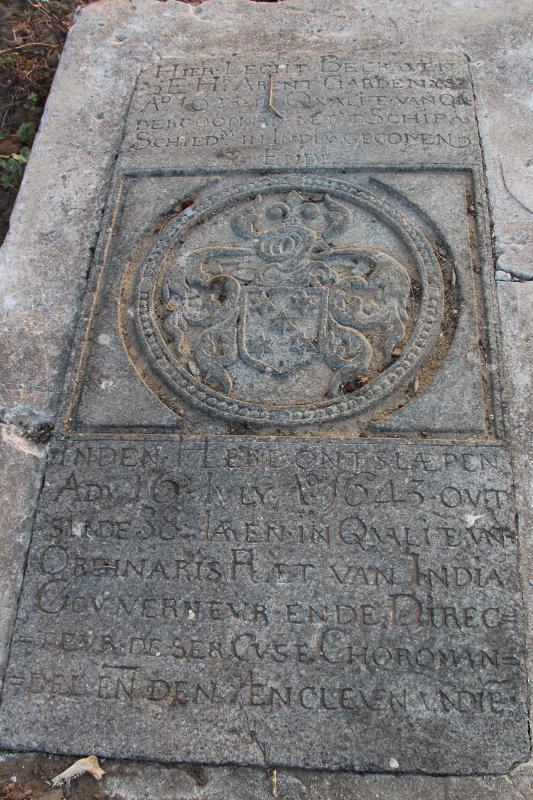 Most of the funerary monuments lie flat on the ground, embedded in a concrete border. One tombstone is on an elevated tomb. In addition, there is a somewhat strange-looking pyramid-shaped burial monument and a small, low tomb, presumably a children's grave. Both are without inscription.

The most recent Dutch grave monument is for Susanna de Mey, who died in 1700. The Binnenkerkhof was already in use for a long time at that time. It is not known why people continued to be buried in the Buitenkerkhof. The cemetery has remained in use after 1700. There is an older monument with Tamil script and a nineteenth-century stela for a drowned British man. There are also some recent graves. In January 2020, however, the cemetery was overgrown again and could not be visited. 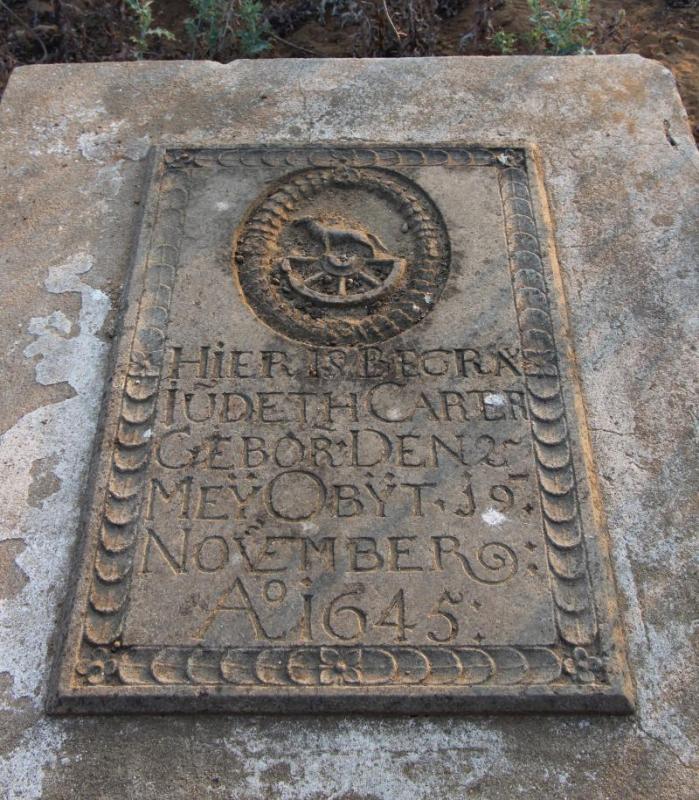 Buried in the fort?

Havart mentions a notable event in 1624 that came to him by oral tradition, as the daily records of Masulipatnam were lost in a flood in 1679. [5] In 1624 Abraham van Uffelen, the chief of Masulipatnam and governor of the Coromandel, was summoned by the prince of Golconda. When he arrived there, he was "bullied with sticks, clubs and bamboos [...]," that he died of his wounds on his return to Masupalipatnam on February 1. [6] The day registers of Batavia confirm the story. [7] According to Mac Leod, Van Uffelen's corpse was then transferred to Pulicat to be buried there in the fort, according to his last wish. [8] Sources to confirm this are lacking. Burials inside a fort are nonetheless not uncommon, especially when under siege.

[2] Daniel Havart incorrectly draws the Binnenkerkhof within the fortification. See the drawing next to page 104 of Part 1 of Op en Ondergang van Coromandel.

[4] It concerns the grave monument for Pieter van Suylen. Still mentioned in Cotton (no. 1546), but not found by Peters. Also not found during own visit in 2017.

[9] On the map the cemetery is not square-shaped as it is nowadays. It is also placed a little too much to the right comparing it with it's current location on Google Maps, assuming the cemetery has not been moved.