Brief history of the Orange garden 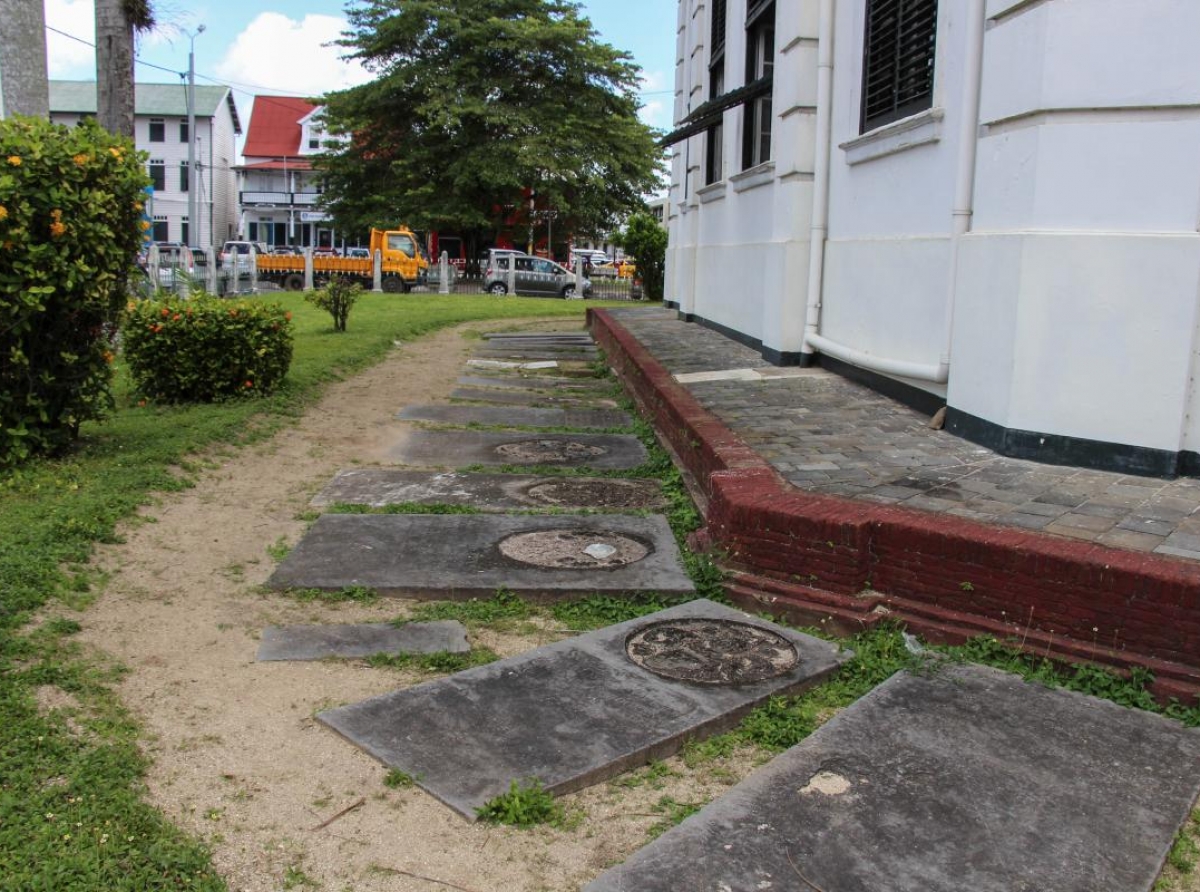 Initially, the dead were buried in and near Fort Zeelandia, especially the senior officers and civil servants. With the arrival of a middle class, there was also a need for a suitable church and a cemetery.

When shortly after the death of Reverend Termaath in 1699 the church of Torarica was dissolved, the pastor of Paramaribo also became the pastor for Torarica. However, Paramaribo did not have a church yet, but there were already church services. The first years these were held in the home of Nic. Combé's , commies of the West India Company (WIC), near the fort. His house was one of the few houses built of stone that had come to Suriname as ballast for the ships. The first mention of a building serving as a church was in the early seventies, until 1688 when a new wooden building was built. People do not speak highly of that building, the church could just as well serve as a warehouse. There is no evidence of burial in this building or its predecessor. Ultimately, a building housing a church and a town hall was built in the Oranjetuin in 1701. The lower floor could be used as a meeting room for the court of police and justice, while the upper floor served as a church. The building also housed the 'weeskamer', the office handeling orphans' administration. The building was situated on the southern edge of the current location, with a market square on the other side and was built of so-called 'klipsteen', the same material with which the fortification wall of Fort Zeelandia is built.[1].

On the side of the current church was a cemetery that was already in use around 1690. This was referred to as Orange Garden, after the orange trees that stood there. However, the small graveyard was not intended for the simple citizen and the workers. They found their final resting place on the corner of Herenstraat and Klipstenenstraat. This cemetery was probably cleared in the mid-eighteenth century. From that moment on, the Savannah may have become the burial place for the poor. In terms of cost, the Orange Garden was comparable to the burial in the church of Torarica earlier, namely 50 guilders. If they wanted a tombstone, they had to pay another 50 guilders. 100 guilders were paid for a double tombstone. The cemetery was not very large, so in 1756 a new cemetery, Nieuwe Oranjetuin, was created on the outskirts of the city. A few years later, in 1763, the tombs in the old cemetery were demolished and the slabs were laid flat on the ground. If people still wanted to be buried in the Oranjetuin, then a hefty fine of 500 guilders had to be paid.

Those who already had a family plot in the cemetery gladly paid the fine. Also because the fine gave them a certain prestige. The visibility of a funeral in the old Orange Garden will also have played a role for some families. Gradually there were fewer burials and the last one took place in 1795. In 1801 the cemetery was finally closed and the market gradually expanded to include the cemetery, as the drawing by Benoit that he made in 1830 during his trip through Suriname shows. 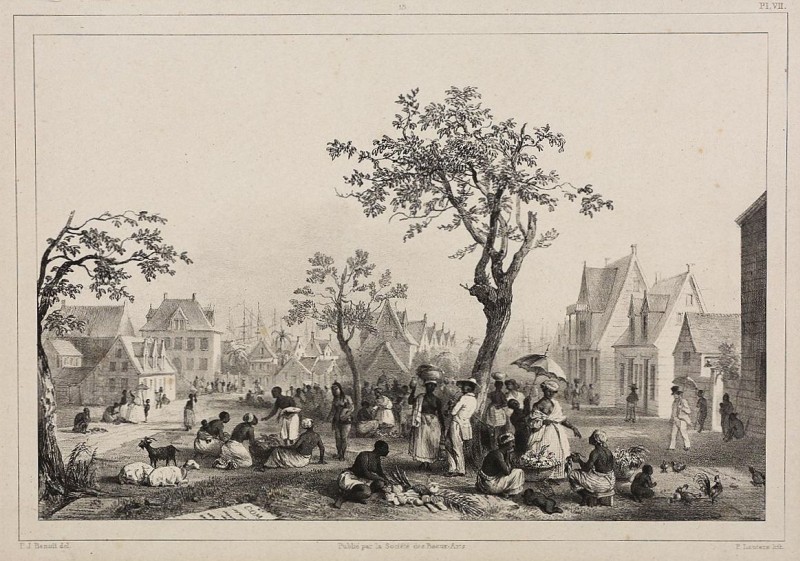 Major repairs were required just a few years after the church was built. At the end of 1722 or early 1723 the church got its own bell in the form of a bell chair next to the church. Until then, the fort's clock had been used. But after a few years the wood turned out to be rotten and the clock was moved back to the fort. Because more and more families moved from the districts to Paramaribo, church attendance also increased. There was a need for a larger church instead of one floor on top of a building, but new construction encountered major objections and costs. It was decided that the existing church had to be enlarged, but the extension would not take place until 1738, but mainly concerned the 'wezenkamer' on the ground floor.

In 1793 it seemed cheaper to the city architect to construct a new building instead of renovating the current building. However, there was insufficient money available and the building was refurbished after all. In 1814, the Reformed congregation finally got its own church building, on the north side of the church square where the cemetery was located. It seems likely that graves were cleared for the construction of the new church, although the exact size of the cemetery is unknown. At that time the colony was under English rule and the old church hall was not demolished but used for Anglican worship. The English king donated 100,000 guilders for the construction of the new church. The remaining 150,000 guilders was raised by a bond loan. From 1816 Suriname would again fall under Dutch rule.

However, people were not allowed to enjoy their own church for a long time, because in 1821 the building, like the old church building, was burnt to ashes during a large city fire, whereby almost the entire old center was lost. In 1822 the foundations of the church were removed and a competition was held for the design of a new church. However, there was no winner and it would take until 1835 for a new church to be built. 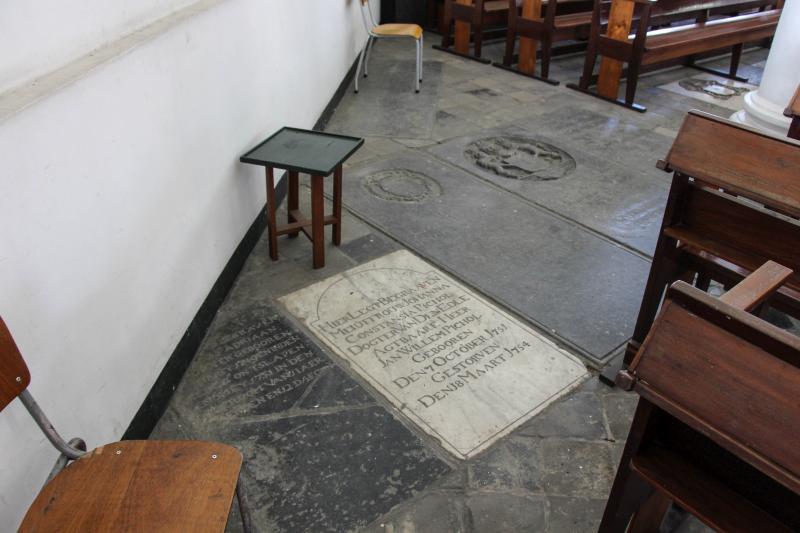 Slabs from the Orange Garden in the Centrumkerk (photo René ten Dam, 2017)

When a new church was built in 1835, the cemetery was also cleared. Some of the slabs were placed in the floor of the new church and a small number were placed on the west side of the church. [3] The cemetery was probably never cleared, or at least not completely. In 1905, human remains were found, as well as coffin remains and ornaments, during the construction of a sewer on the church square.[4]

[3] Because there are slabs in the current church, the misunderstanding has arisen that there were burials in the church.