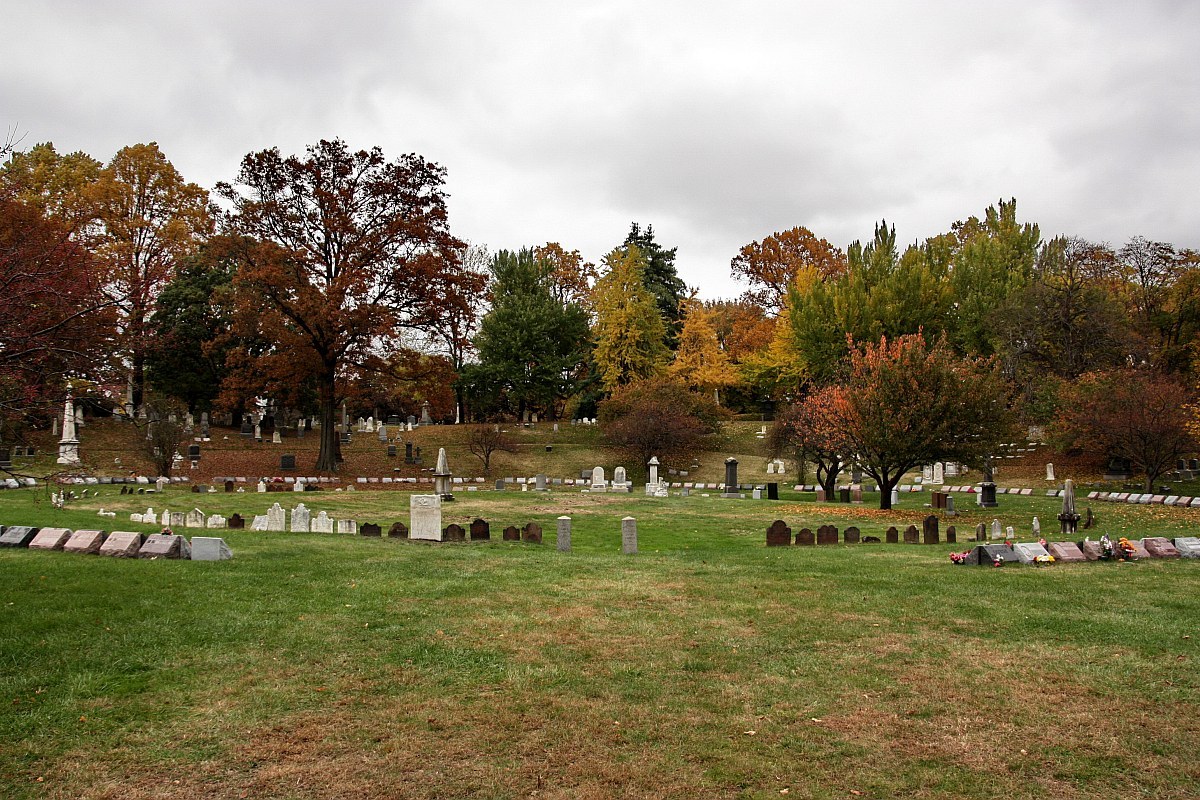 In New York's nearly 400 years of existence, countless cemeteries have been laid out, used and disappeared. The oldest, especially churchyards, date from the second half of the seventeenth century, when first the Dutch and later the English had control over the settlement. With the growth of New York, the need for larger cemeteries arose. These cemeteries were no longer built close to the city, but further away, in places that were less suitable for agriculture, for example. With many of those cemeteries from the nineteenth century, there is no immediate thought of a link with Dutch history, but there often is such as at Green-Wood in Brooklyn.

Green-Wood was laid out in 1838 and put into use in 1840 in the run-up to the ban on burials within the city-limits. The immense cemetery covers no less than 200 hectares and that includes four lakes that lie in the park. The height differences, especially in the western part, provide beautiful views and from the highest points one can see Manhattan and the harbor of New York. The grave culture is also special. The wealthy inhabitants of New York soon found Green-Wood to propagate their status in death. A plot in a first class place costed thousands of dollars at the time. And then there were also beautiful burial chapels and mausoleums erected. 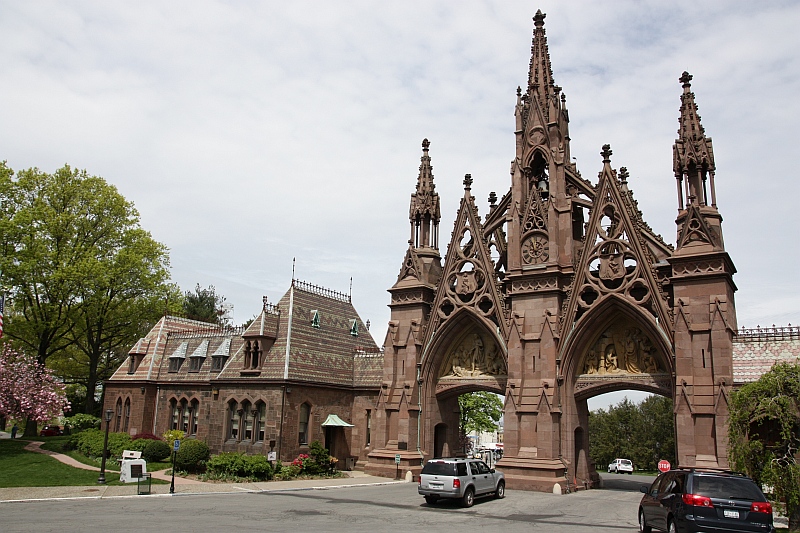 The entrance to Green-Wood, built entirely of sandstone, dates from 1863

In the years that followed, Green-Wood also came to play a role as a place where the remains of decommissioned cemeteries were transferred. For example, the Brooklyn district, formerly Breukelen, had grown strongly in the nineteenth century. Breukelen originated in 1646 as an agricultural village where the local church still served its flock in Dutch until around 1800. That church was organized in 1660 but at that time burials already took place on a piece of land nearby, even before the church was built in 1666. In 1662 the cemetery of Breukelen was officially put into use and the members of the reformed church were buried there. With the introduction of English as the official language, the name of the denomination changed to the Reformed Dutch Church. The cemetery was called the First Reformed Dutch Churchyard. The church itself remained in use until 1807, when the parish had a larger church built elsewhere. However, the old churchyard continued to be used until 1849, when it was forbidden to bury any longer within the city limits. This brought an end to almost two centuries of burial near the church. For some time the cemetery remained like this, but in the sixties of the nineteenth century plans were made for the closure of the cemetery. In 1865, work began on transferring the remains of the churchyard to a location on Green-Wood. Almost in the middle of the large cemetery, the Reformed Dutch Church had bought a large piece of land where the remains were buried and later also the remaining gravestones of the churchyard were placed. The register of graves of the churchyard has been preserved. On the spot where the churchyard was located, a department store of Abraham's & Strauss was built not much later, now Macy's.

In 1869, the remains and gravestones from another cemetery in Brooklyn were transferred to Green-Wood. This time from St. Ann's Church, a church founded in 1778 by Brooklyn residents who no longer wanted to attend the services of the Dutch Reformed Church. They also bought a large plot on Green-Wood and because of the older funerary monuments, this part is also very recognizable.

At Green-Wood cemetery, almost in the middle, the old tombstones were placed in a large circle. The location is a valley with the name Cedar Dell and it forms a beautiful secluded place due to its location. Nothing recalls the probably linear arrangement in the original churchyard. At the entrance to the circle there are granite columns with the text "Protestant Reformed Dutch Church of Brooklyn". And for whoever entered the circle with tombstones, some older tombstones came in to sight. Some of them with a text in Dutch, such as the one for Rem Remsen. Remsen was born in 1683 in Brooklyn and died in 1760. He married Dorothea Cartelyou, also with a Dutch background. Together they had nine children. More gravestones bear the name Remsen and in Brooklyn you can find a Remsen Street and a Remsen Avenue. 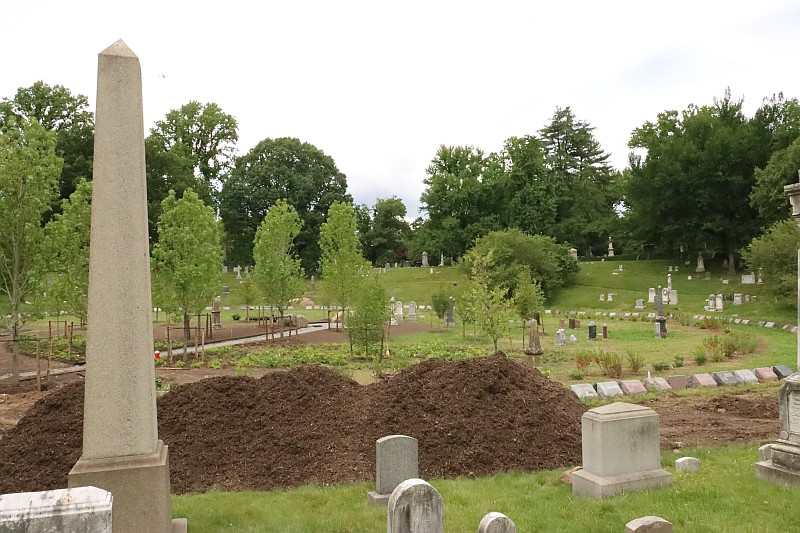 In 2022 work on Cedal Dell was completed.

There is also a rough hewn stone between the tombstones with simple initials with a year that could be read as 1735. In 2021, many tombstones had sunk, so that much of the text could no longer be read. In the meantime, a special curator has been hired who not only restores the stones, but also investigates the stories behind them. In 2022, all older funerary monuments were removed from the circle pending a new lay out for the area. In the meantime Green-Wood cemetery has become the owner of the piece of land so that they could carry out the plans to give the valley a different look in their own way. Various activities have already been organized in the valley and that will continue to happen in the future.

In addition to this direct reference to the Dutch past at Green-Wood, there are also numerous other grave monuments that indicate this. Names such as Hageman, Arents, Rosecrans, Schenck and Boerum undoubtedly have a Dutch origin.

Header: The Cedar Dell in 2009, with the funerary monuments transferred from the old Brooklyn cemetery in the center.