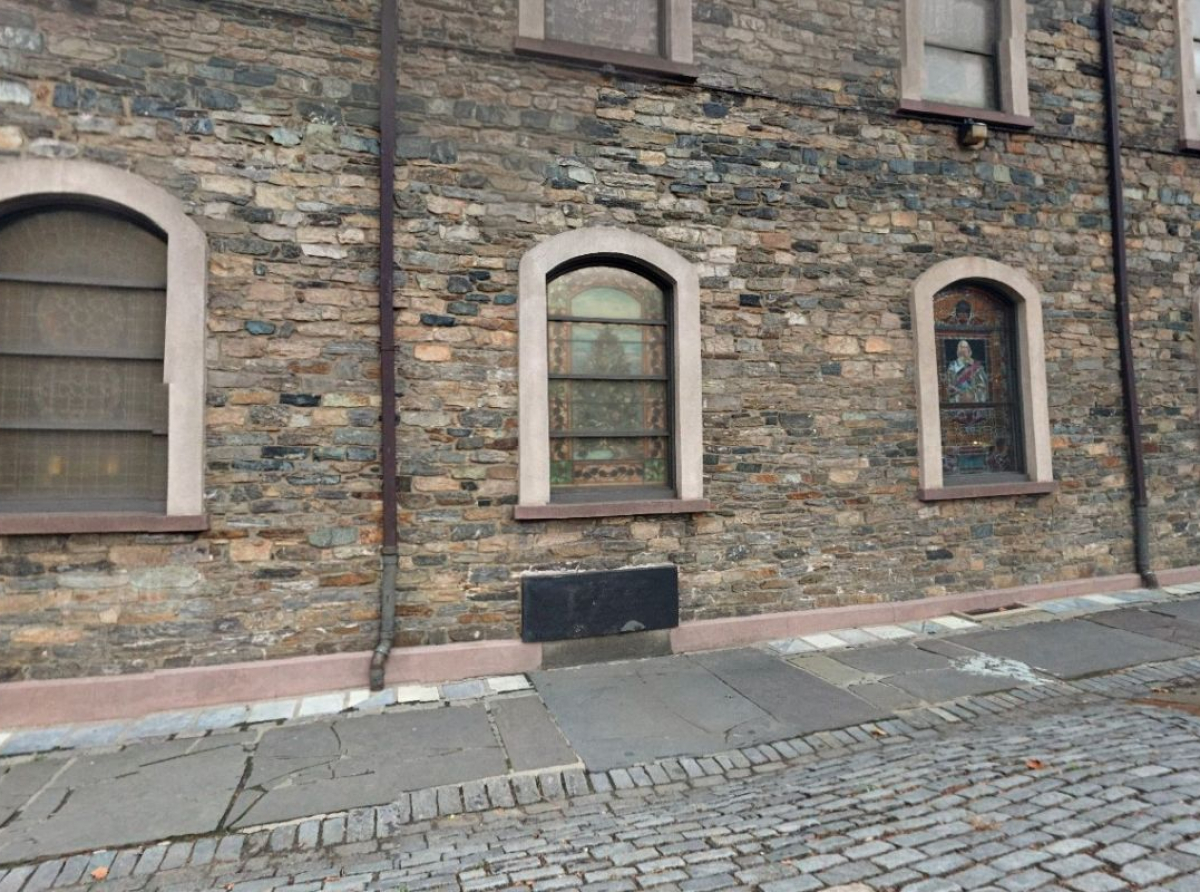 Stuyvesant died in 1672 at his bowery and was interred in the crypt under the chapel. In 1687, after her death, his widow left the chapel to the Dutch Reformed Church of New York on the condition that the tomb be preserved.

I doe further bequeath to my said Cousen Nicholas Bayard and to his wife and Child or Children (if desired) a bureing place In the Tomb or Vaught of my Last deceased husband In the Chappell or Church att my Bowry ; And In case it should happen that my sayd Church or Chappell did Come to decay or for an other Reason be demolished I doe hereby declare and publish it to bee my Last will and Testament that of the materialls and Rubbage, of sayd Chappell bee made a buildeing Sufficient ffor a Coover upon the said Vaught. . . . And I doe by these presents further by forme of a Legasie Give and grante to the Reformed nether dutch Church or Congregation of the Citty of New Yorke My Testracies Church or Chappell Seituated On my bowry or farmes Together with all the Revenues proffitts and Immunityes As alsoe with all the Incumbrances to the said Chappell belongeing Or appertaininge To have and to hold the said Chappell and appurtenance after the time of My decease Unto the Overseers of the said Congregacon to the use aforesayd for Ever with further power iff they see cause to demolish or displace the same and to Employ the Materialls thereof to such Uses as they shall think ffitt & expedient Provided that in such case of the sayd materialls bee made and built all and whatsoever In the Inclosed Testament Is Exprest and Required for the preservation of the tombe or vaught which was built by my deceased husband in the said Church.[3]

In the eighteenth century the chapel fell out of use and was dilapidated. The building was destroyed in a fire in 1777. In the meantime, the Stuyvesant family had joined the English Church, and in 1793, Peter Stuyvesant, the great-grandson, offered the Episcopal Church a plot of land measuring 150 by 190 feet (about 45 by 59 meters) to build a church as the city expanded further north. The remains of the chapel were sold to the Episcopal Church for the symbolic sum of $1.[4] In 1795 there were sufficient funds, and the foundation stone was laid on the site where the Stuyvesant chapel previously stood. When the church was built, the burial vault was placed under the church, but was otherwise untouched. In 1799 the new church was completed and consecrated. In the years that followed, the church would be further expanded to its current state. Initially the church was located on an avenue outside the city, but the church was soon surrounded by building blocks, so that the church has a different orientation. 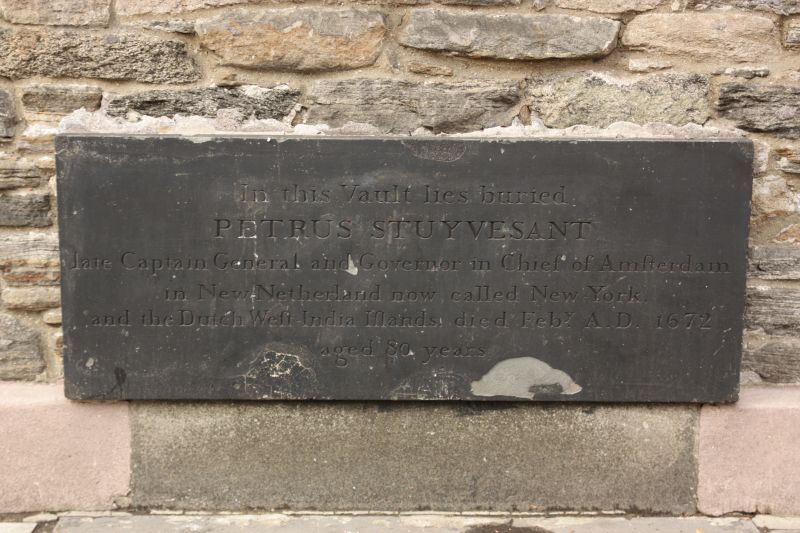 The crypt of the Stuyvesant family continued to be used by the Stuyvesant family after the church was built. The cellar, some 12 meters (almost 40 feet) in length, remained accessible through an opening in the 5-feet (1.5 meter) thick foundation and by a stairway that was closed with a stone slab on the outside of the church. In 1804, the churchyard surrounding the church was closed off with "neat palings in front and boards in their original state on the sides and rear." More crypts were built next to the church in 1807, where several prominent Americans were to be interred in the nineteenth century. 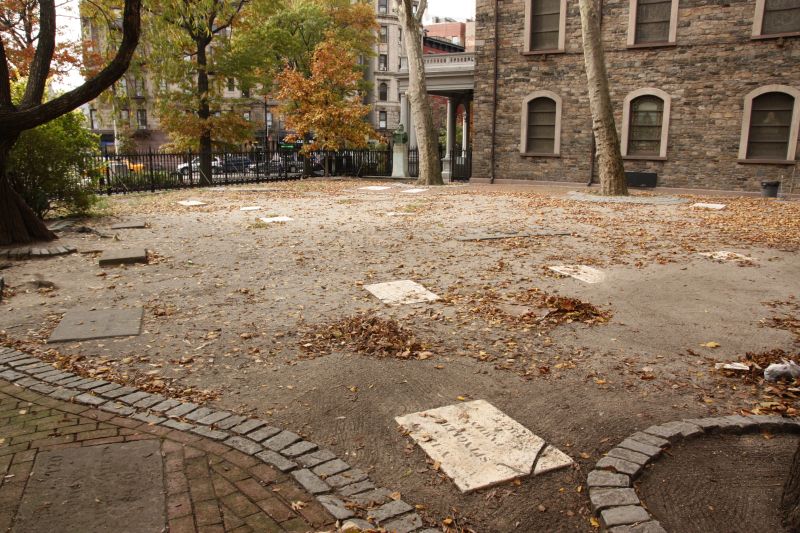 The burial vault for the Stuyvesant family remained in use until the twentieth century and a stone plaque was placed under a church window above the entrance to the cellar, in memory of Peter Stuyvesant.

Originally the year 167½ was mentioned on the stone. Until 1753, the legal year in England began on March 25, so that all dates between January 1 and March 25 fell in different years. Stuyvesant died in February. Later, the plaque was replaced by the current one. In 1903 the church was given stained glass windows, including one with a depiction of Governor Peter Stuyvesant. Next to the church is a bust of Peter Stuyvesant, a gift by the Dutch Queen Wilhelmina in 1915. 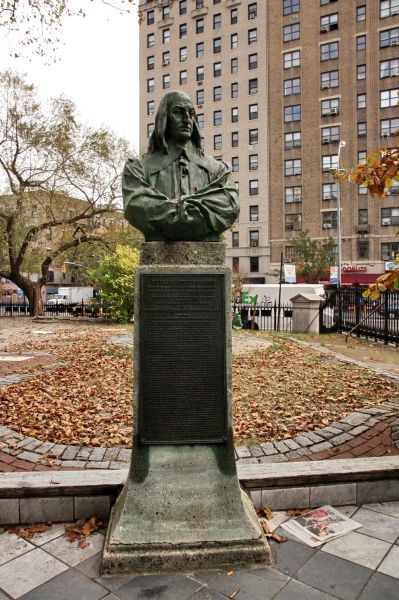 In 1805 the great-grandson, named after Peter Stuyvesant, died. He was also interred in the family vault. Inside the church, on the eastern wall, a plaque was erected in his honour.

To the memory of
PETER STUYVESANT.
This monument is erected by his children
as a testimony of
filial Love and Gratitude.
He was born 13th October, 1727, O. S.,
Died 7th October, 1805,
And his remains are deposited
in the vault of his Ancestors
within the walls of this Church.
The kind Father, the faithful Friend,
The honest Citizen, and the sincere Christian
rests from his Labours,
and his Works do follow him.

Around 1913, Augustus van Horne Stuyvesant Sr. made changes to the entrance to the burial vault and placed a marble tiling in the cellar itself. In 1953 his son, Augustus Van Horne Stuyvesant Jr., the last direct descendant of Peter Stuyvesant, died. A few months later, in January 1954, the crypt of the Stuyvesant family was finally sealed. The basement was bricked up and access to the basement stairs was also closed. The crypt is said to have interred more than 80 members of the Stuyvesant family during its 200 years in use, as well as British Colonel and friend of the Governor Henry Sloughter and some of the Governor's enslaved.[5]

The church is still called St. Mark's Church in-the-Bowery, thus remembering the reference to the origin of the lot.