Traces of a Dutch presence can be found all over the world from the past few hundred years. From Spitsbergen to Brazil and from North America to India, remains of Dutch trade can be found everywhere and cemeteries have been laid out in many places. One of the areas was the territory of New Netherland in the present-day United States (US). At about the same time, the English settled in what they called New England and started a colony there that would eventually outflank the Dutch.

The area where the Dutch settled is spread over what are now the states of New Jersey, New York, Delaware and Connecticut. The Dutch were particularly active in Manhattan, Brooklyn and in the valley along the Hudson. Oddly enough, the oldest grave markers in that area only date from the early eighteenth century, although the first settlement there took place a century earlier. This is strange in relation to New England, because the oldest grave markers there date from the second quarter of the seventeenth century, while the oldest in the Hudson Valley date from at least 60 to 70 years later.

2009 was the Hudson year. Exactly 400 years earlier, Henri Hudson sailed with his ship the Halve Maen up the river that would later be named after him. It heralded the beginning of a real colony that was under Dutch rule until 1664. At the time, the area where the Dutch settled was called New Netherland and extended over an area that was at least as large as the Netherlands, Belgium and Luxembourg together. The main settlements of the Dutch, and everyone else who wanted to settle in the new land, were located in the Hudson Valley. The most famous was New Amsterdam, present-day New York. Much has already been written about the Dutch influence on the region in terms of culture and politics, but little is known about how and where the first settlers buried their dead.

Incidentally, it must be said that although Dutch people are spoken of, it was more about a heterogeneous group of people with a Dutch background. Language and faith were binding on those who had left the low countries for the colony. Some of them had spent only a few years in the Netherlands after coming to the Low Countries from Germany, Wallonia or Scandinavia, mostly because of their religious beliefs. Some Dutch settlers married English, Scots, Walloons or others in the new country. What bound them until 1664 was the origin of the main group of settlers and their common language and rules they followed. With the reign of the English, it took at least another century for that background to blend into what would become America.

Not long after 1609, ships again traveled to the Hudson, initially called the North River. They acted on behalf of the Dutch East India Company (VOC) or on the basis of a patent of the States General. All sorts of small trading posts were set up along the Hudson by these pioneers. The trade mainly concerned furs and skins. Fort Nassau was established near present-day Albany (NY) in 1614. This was not the first building on the site, as French trappers and traders had set up posts there before. In 1618, Fort Nassau was abandoned due to continuous flooding. More south Fort Oranje was built.

After the United West India Company (WIC) was set up in 1621, it was given exclusive rights for trade in New Netherland. It was not the intention of the WIC to colonize New Netherland, but to use it as a winning territory for trade. Not long after, in 1624, the first settlers were sent to Noten Island (now Governors Island). This island, conveniently located in a bay into which the Hudson and East Rivers meet, was used as the first base of operations. From there they moved on to other trading posts that had meanwhile been set up along the Hudson or elsewhere, or to Fort Oranje. Virtually nothing is known about where the first settlers - not only the Dutch, but especially the French Huguenots and Walloons - buried their dead. Churches were built much later, but cemeteries will undoubtedly have been needed earlier. However, this is not mentioned in all the history books and research into New Netherland. Because in those first years only a few hundred people were involved, spread over a large area, the dead who fell will also be buried over a large area. Nor will it have involved large numbers. Only with the foundation of the churches, more is known about the cemeteries.

With regard to the first grave markers in the Hudson Valley and around New Amsterdam, the following can be assumed:

However, a little more is known about the cemeteries themselves. Old maps and church records help to reconstruct a picture of the first cemeteries in what is now New York City.

New Amsterdam and the first cemetery

Noten Island soon turned out to be too small to serve as a base for the further expansion of New Netherland. The livestock that had been brought on the ships had hardly any room to graze on the small island. They wanted to keep livestock in order to provide for the basic necessities of life. So more land was needed for that. In the spring of 1625, the WIC decided to build a fortress on the land on the other side of the island. That land also turned out to be an island, called Manhattan, but with more land than little Noten Island. Willem Verhulst, the second governor of New Netherland, received all kinds of instructions from the Netherlands about how the fort should be set up. The fort was to be given the name Amsterdam, but the town was soon known as New Amsterdam. Construction started in July 1625 and Verhulst followed the guidelines from the Netherlands for the construction of roads and the division of the land near the fort. It also stated which legal rules he had to apply.

The instructions said nothing about a cemetery. The WIC probably left such matters to the church. That was the Reformed Church of Amsterdam. However, it was not until 1628 that they actually organized a church with its own pastor. Until that time, believers used a room in the New Amsterdam mill for the meeting, and the service was provided by a lay preacher. The first proper church was built in 1633 in Herenstraat, now Broadstreet. It would not have been a large building, but sufficient for the population present at the time. In 1642, however, the church had become too small and a new church was built in the fortress. It was made of stone and it is possible that people buried here in the church. The first real cemetery was built just north of the fort (the intersection of current Morris Street and Broadway) and can be found on later maps as an 'old church yard'. Burials may have taken place here from 1628, but the exact date is unknown. With the growth of New Amsterdam, more information will become available. For example, the cemetery appears in the archives, because the cemetery was not equipped with a fence. This allowed stray pigs to root in the ground, which was seen as a nuisance. We also know from these documents that the cemetery was about 25 by 25 meters in size.

On January 24, 1656, the churchwardens proposed to clear the old cemetery and use it as building land for new houses. The cemetery was in very bad condition and it was proposed to build a new cemetery south of the fortress. A number of houses there would have to be demolished. Mayors and aldermen, however, indicated that they did not feel much for this. They suggested a site west of the fortress near the windmill. In the end nothing happened. The situation around burials was probably the same as in old Amsterdam. The church took care of the funeral, the burial and all that went with it, but the congregation took care of the ground and the supervision of the maintenance. But who should do the work was sometimes very unclear, as was who should pay for what.

The second cemetery to be built in New Amsterdam was not for the Reformed Church, but for the small Jewish community. These were Sephardic Jews who had fled from Brazil and sought refuge in the Dutch colony, which was known for being tolerant. They had founded the Shearith Israel Congregation in 1654. To bury their dead, the congregation was allocated a small plot of land outside the city, although Governor Stuyvesant initially opposed this decision. The first burial was done here in 1656. The cemetery was expanded in 1681 and again in 1729. In the meantime, small cemeteries were also established in other villages, on 't Lange Eylandt (Long Island) and in the north of Manhattan. 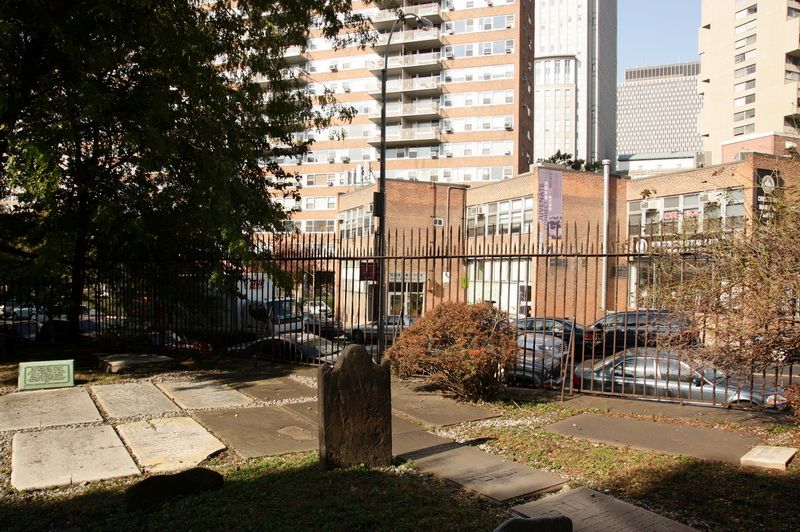 After the English took over in 1664 and the city was renamed New York, the old cemetery was again reported to be in a very bad state. In June 1666 the city made 500 guilders available to erect a fence because the church had no money for it. The church had to pay the money back to the city. In 1676 the old cemetery was cleared and soon houses were built here. Today there is a skyscraper on the same spot. From 1676, the new public cemetery outside the rampart was in full use.

As mentioned earlier, the Jewish community established its own cemetery in 1656. It exists to this day, but what remains is only a fraction. Burials continued until 1831, but around 1800 the cemetery was hardly in use anymore. The cemetery is located on St. James Place. Now a busy neighborhood, but at the time it was a rural corner outside the city. The cemetery is known as the first cemetery. The cemetery has endured turbulent times and is now somewhat hidden in a busy area. Many of the headstones and remains have been transferred to what is now called the Third Cemetery, located on 21th Street. This cemetery was opened in 1829 and was only in use until 1851. Parts have also been transferred to a large Jewish cemetery in Queens.

In 1693 the Dutch Reformed Church, as the congregation was now called, opened a second church in Garden Street (now Exchange Place). The services in the church were still done in Dutch, just like in all other churches of the Dutch Reformed Church. Burials were also done around the church on Garden Street from 1701. That lasted until 1766 when the municipality banned burial in the ever-growing city. Church and cemetery survived until 1835. During a major fire that year, the church was so badly damaged that it was not built up again. The graves were transferred to two crypts in the New York Marble Cemetery [1]. It is not known what happened to any funerary monuments. The destroyed area was completely redesigned and built with more contemporary buildings. 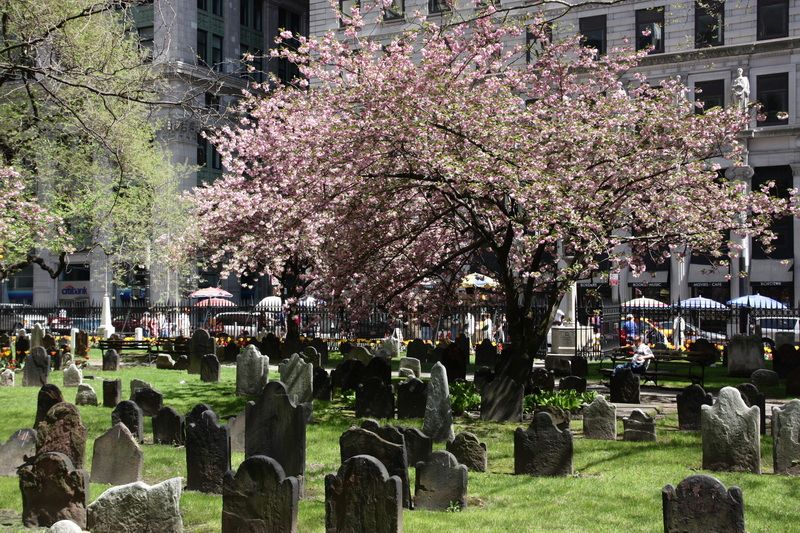 The northern part of the Trinity cemetery, where the second cemetery of New Amsterdam must have been once. (Photo Leon Bok, 2009)

Hardly anything remains of the first Dutch cemeteries in New Amsterdam/New York. Only the second cemetery remains to be found. In 1697 the congregation of the Anglican Trinity Church built its church south of this cemetery. The cemetery at that church adjoined the public cemetery. In 1703 Trinity Church took over the public cemetery on the condition that the congregation could continue to use the cemetery. Finally, burials at this location were discontinued in 1822. At that time, 160,000 remains were buried here. The current Trinity Church dates from 1846. There are no longer any traces of Dutch funerary monuments or names that evoke memories of the Dutch in the cemetery.