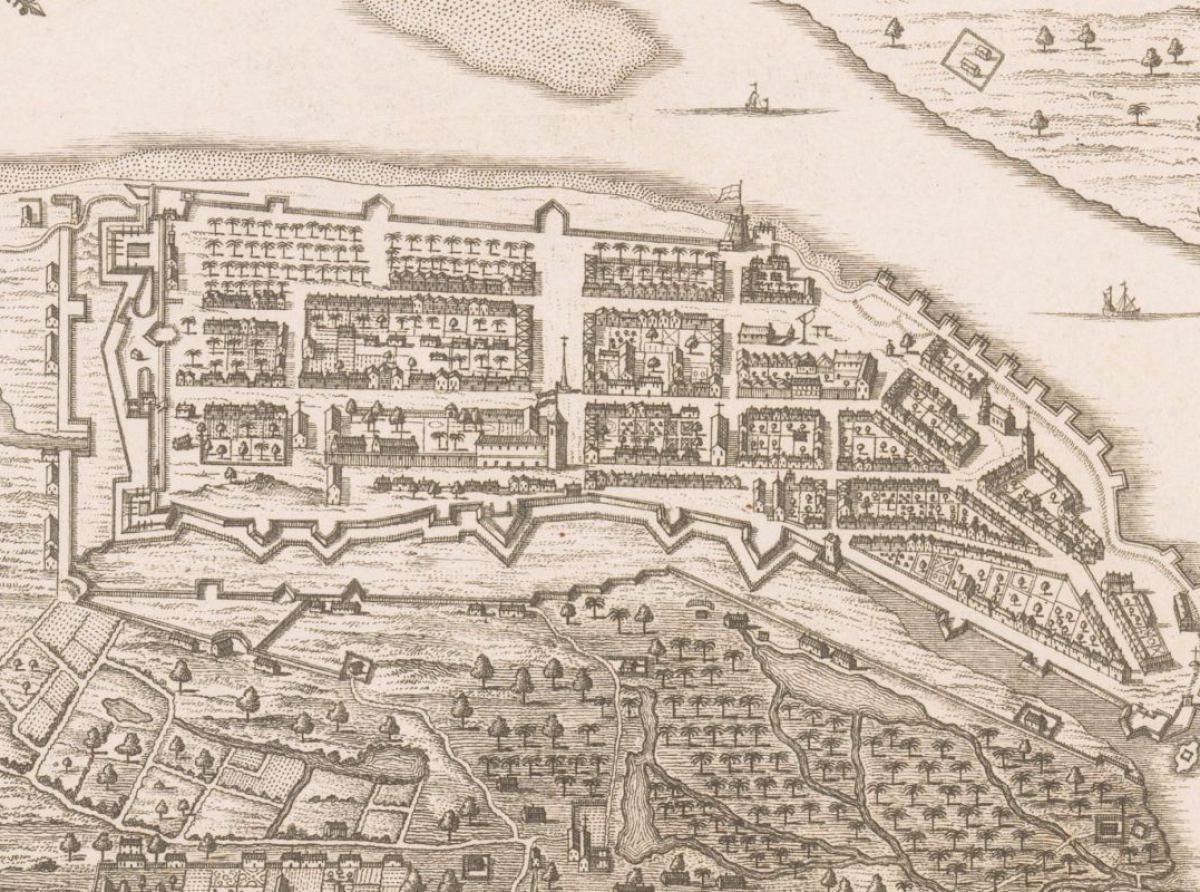 According to oral tradition, it was the apostle Thomas who introduced Christianity to India in AD 52.[1] Today, the Mar Thoma Christians, the Christians of Saint Thomas (also called Thomas Christians), still live along the coast of Malabar. They belong to the churches of the Assyrian tradition, of which Saint Thomas is said to have been the founder in India.[2] These Assyrian Christians speak Syriac, a dialect of Aramaic, the language that Jesus spoke. Their churches are simple, with hardly any furniture and where the community sits on floor mats, like in Hindu temples.

IIndia was not an unknown country for the people of the Levant. According to legend, the first Jews settled in the kingdom of Cochin during the time of Israel's King Solomon, but a much larger group of Jews did not come to India until after the destruction of the Temple in Jerusalem in AD 70. They settled in Cranganore.[3]

The arrival of the Europeans

In 1498 the Portuguese navigator Vasco da Gama reached the coast of Malabar and concluded a trade agreement with the Zamorin, the ruler of Kozhikode (Eng: Calicut). In 1505, Portugal established a permanent colony in India, with Cochim as its first capital, today's Fort Kochi. In 1510, the headquarters were moved to Velhas Conquistas, later Goa, Daman and Diu. For several centuries the Portuguese were an important player in local trade, but the colony of Estado da Índia would lose more and more power and influence in the eighteenth and nineteenth centuries and came finally to an end in 1961. After the independence of India in 1947, Portuguese possession was already limited to a number of enclaves.

In the fifhteenth and sixteenth century, establishing a trading empire by the Portuguese went hand in hand with spreading the Catholic faith. The Indian Christians were seen by them as pagans, as they did not recognize the Pope in Rome, but were loyal to the Syriac Orthodox Church which was located in Antioch, in present-day Turkey. The Catholic faith was therefore forced on the local Christians. For example, the Portuguese placed a typical Portuguese Baroque facade in front of the churches of the local Christians. Subsequently, the interior of the churches was also decorated according to European example. 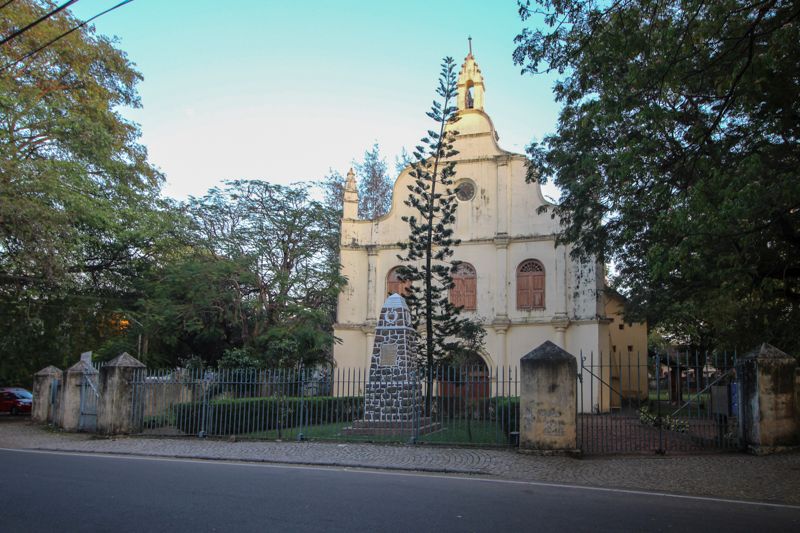 In 1603 the Portuguese Pedro Alvares Cabral had Fort Manuel built in the kingdom of Cochin, which the name Fort Kochi still recalls. The fort would remain in Portuguese hands until 1663, when the Dutch took control of the area and drastically reduced the size of the fort to cut costs. The fortress itself no longer exists today. However, within the current Fort Kochi, traces of foreign presence can be found in the buildings and also in a cemetery. However, the oldest European graves can be found in a church, the only Portuguese church the Dutch didn't demolish after reconstructing the fort.

In 1503, Portuguese Franciscans accompanied Francisco de Albuquerque, who had a small wooden church built in the fortress dedicated to St Bartholomew. In 1516 it was replaced by the current church, with a typical Portuguese flat facade and dedicated to St Anthony. According to the custom that was common in many European countries, the dead were buried in the church. This only applied to the prominent Portuguese, the foot soldiers probably had a final resting place elsewhere in the fort. When the Dutch took power in 1663, they continued the custom of burials inside the church.

The most famous funerary monument in St. Francis Church is that of Vasco da Gama. He died in 1524 after having the church enlarged to its present size. Da Gama was buried in the church, but in 1538 his remains were transferred to Vidigueira in Portugal. In 1872 his remains were given a final resting place in Lisbon. However, the gravestone can still be found in the church. It is not known whether the tombstone is still in its original location. 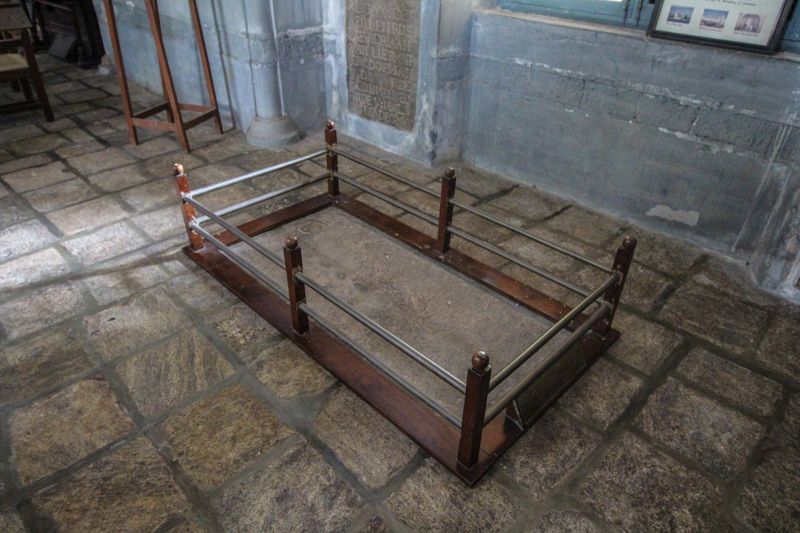 Unfortunately, little is known about the manner of burial in the church by the Dutch. This probably happened in the same way as in the Netherlands, where the dead were buried in wooden coffins in sand graves. In the St Francis Church, the existing graves of the Portuguese were most likely used for this. Skeletal remains from this graves were most propable buried in a charnel grave. Nothing is known about the use of burial vaults.

At the end of the nineteenth century, almost all tombstones were transferred from the floor to the walls by the British. The Portuguese tombstones have been placed in the northern wall and the Dutch slabs in the southern church wall. It is not known whether the remains were cleared in the church or possibly reburied in the cemetery. In the same year, 1886, the church was dedicated to St Francis and thus renamed.

Julian James Cotton, who in 1905 published an inventory of European funerary monuments in southern India, mentions as the oldest funerary monument (after Vasco da Gama) in the church the tombstone for Diogo Dia, who died on 20 January 1546. The youngest dated Portuguese grave monument is for Diogo Vincente, who died in 1655. Cotton mentions 28 Portuguese tombstones, 10 of which are undated.

Interestingly, Cotton mentions a number of Portuguese tombstones found outside the church. At the time, there were three tombstones on the site of the Port Office, Parade Road, one of which was undated. The oldest of the three funerary monuments is for Simeã de Miranda, who died on August 8, 1524. Cotton also calls this the oldest European funerary monument in India. In addition, Cotton mentions a number of tombstones that have been found here and there in the streets of Cochin, sometimes as a threshold or as a capping stone for a well. It is not known whether this and the other gravestones have been preserved outside the church.

The oldest Dutch funerary monument dates from 1664 and is for Sara van Heiningen, housewife of Lucas van de Dussen, 'Fiscael over Teiland end Ceilons custe van Madure Malabaar'. One of the first Dutch pastors in Kochi is also buried in the church, Balthasar de Meter, who died on March 18, 1666. In the two years that the Dutch used the church for worship, he was already the fifth pastor in the pulpit. Phillippus Baldaeus, among others, had preceded him. Baldaeus would later become widely known for his documentation of the culture and language of the Tamils in Sri Lanka (then Ceylon).

The register of the graves in the church has been lost, but from the marriage and baptism registers, copies of which can be consulted in the church, it is clear that in 1663 the Portuguese did not disappear from Kochi with the arrival of the Dutch, but continued to live there and sometimes also married the Dutch. For example, the Portuguese Esperanca D'Abreo married Hendric Reyns. She was buried in St. Francis Church after her death on December 20, 1673. The tombstone also mentions their daughter Elizabeth, who had died a few months earlier at the age of two.. 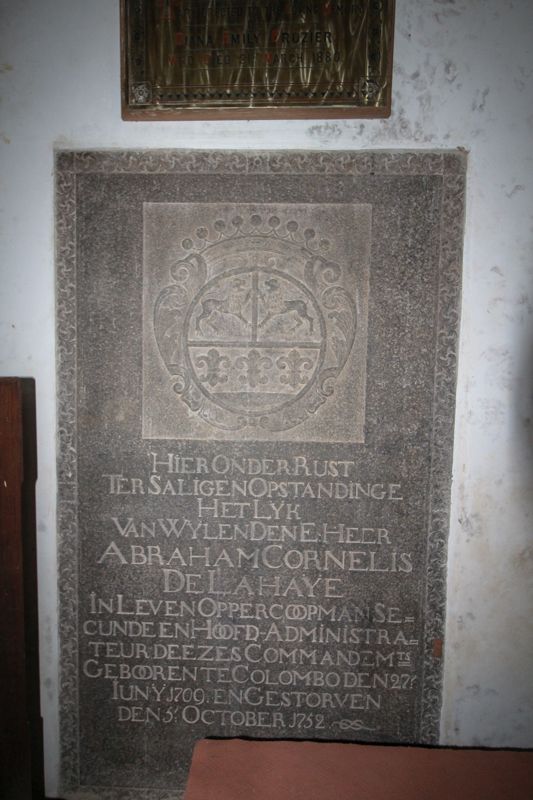 There are more tombs with the names of several deceased relatives, often children. Several Dutch people who are buried in the church were actually not born in the Netherlands, but in India (in Dutch: Voor-Indië) or in, for example, Indonesia, (in Dutch: Nederlands-India, later Nederlands-Indië). Abraham Cornelis de la Haye was born on June 27, 1709 in Colombo, Ceylon. He entered the service of the VOC in 1723, became an assistant in 1729 in Batavia, present-day Jakarta, and after holding various positions in 1740 became fiscal in Surat. In 1749 he became chief merchant and secund in Cochin and in 1750 and 1751 he was temporary governor of Malabar. De la Haye died on October 5, 1752 in Kochi.[5]

Perhaps the most striking tombstone is the one for Silvestre Neer. He was a captain in the service of the VOC and was shot dead near Cranganoor, as witnessed by the text on his grave monument:

To the reward of virtue and honour
In dark grave enclosed
Here Silvestre Lies Down
Shot at Cranganoor.

The year is shown in Roman numerals: MDCLVVVV, which would mean 1670. The slab is bricked into the wall, but unfortunately damaged and difficult to read.

In total there are 20 tombstones with a Dutch inscription.[6] The most recent tombstone belongs to Reinier van Harn, a living senior merchant and chief administrator in the government. He died on March 16, 1789.[7] The oldest tombstones are quite rudimentary, that is, they do not appear to have been worked by a stonemason, but are roughly and unevenly carved. A number of tombstones are also smaller in size. 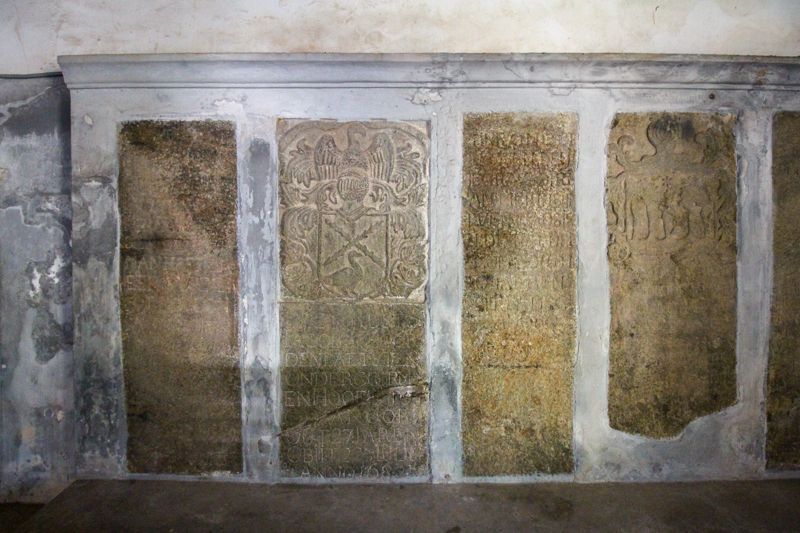 Bricked-in Dutch slabs in one of the church walls.

According to Cotton, the Dutch would have used the back of Portuguese funerary monuments to make funerary monuments for their compatriots.[8] In his inventory he states that the name of Francisco Ruiz Milão, who died on January 24, 1565, is mentioned on the back of the tombstone for Adriaan van Ommen. The tombstone was cut to size for Van Ommeren's grave. It is possible that several Dutch gravestones contain Portuguese inscriptions on the back.

When the English took Kochi in 1795, burial in the church may have come to an end, although the Dutch would continue to use the church for services until at least 1804, as evidenced by the pastor's sign in the church. Although some memorial boards for Englishmen are known, they are probably not buried in the church. They may have been buried in the cemetery that is known today as 'Dutch Cemetery'. In one of the pillars of the gate of the cemetery is the year 1724. It is not yet known where the dead were buried who were not given a place in the church. They may have been buried on the same spot where the Portuguese also buried their dead, but the location of which is also unknown.

In the church there are four Dutch tombstones with a date later than 1724, the year on the wall of the cemetery. These are the wife of a commander, two children of a commander and two commanders themselves. This indicates that until they were expelled in 1795, the Dutch used the church as the final resting place for the most important families living in Kochi.