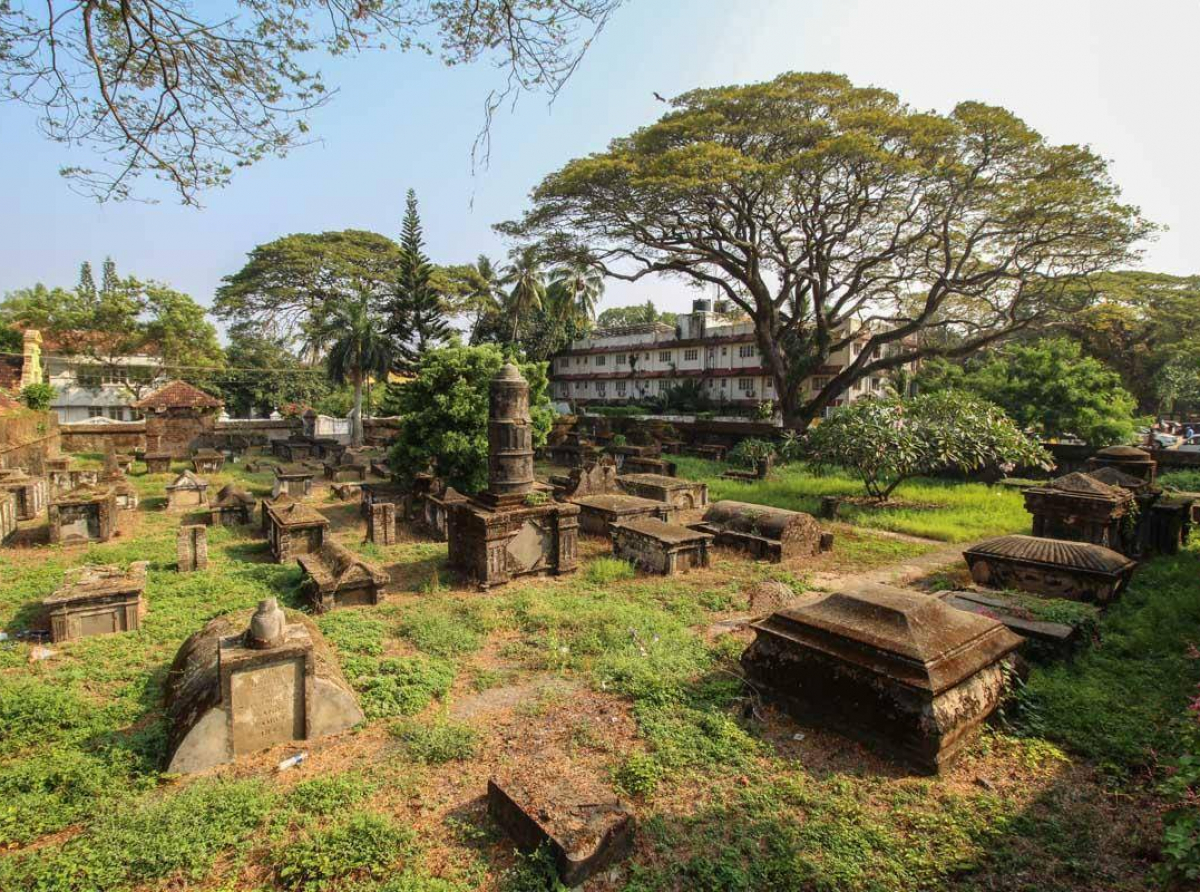 Close to Fort Kochi's former bastion Gelderland the Dutch Cemetery is located, a silent testimony to the Dutch presence in this coastal town. In 1663, the Dutch took what was then Fort Manuel, built by the Portuguese. The original fort was considerably reduced in size by the Dutch for cost reasons and they also made the necessary adjustments within the fort. St. Francis Church was used by the Dutch for Protestant worship, while other Portuguese churches were demolished. The Santa Cruz Cathedral was even converted into a warehouse.

The Dutch dead were buried in the St. Francis Church, as the Portuguese had done for them. However, it can be assumed that the church only provided a final resting place for the highest ranks and their families. The common soldiers and lower personnel will have found a grave elsewhere after their death. It may have been at the same location where the Portuguese had their dead buried who were not given a place in the church. It is not yet known where exactly that was. Old maps give no indication of the existence of a cemetery within the fort, which had been reduced in size by the Dutch. There are also no indications that there was a graveyard around or near the church.

Cemeteries and cemeteries are generally poorly presented in the literature. Usually little is recorded and when there are no more grave registers available, it is almost impossible to find out who is buried in the cemetery. Sometimes even the location of a historic cemetery can only be found on the basis of old maps. The only thing that sometimes remains are the tombs themselves. Fortunately, there are some inventories of the Dutch Cemetery in Fort Kochi, although they mainly contain genealogical information based on transcriptions of the texts on the funerary monuments and they rarely give any indications about the funerary monuments themselves.

The old Cemetery is a few minutes' walk from St. Francis Church on Dutch Cemetery Rd., right next to the sea. The orphanage for the poor used to be on this location, as can be seen on old maps, where the street is still called Weeshuijsstraat (Orphanage Street). The cemetery is approximately 1,500 m2 in size and has a plastered wall with a wide saddlebackcoping on all sides. At the front is a gate, consisting of a double fence between pillars. On the right pillar of the entrance gate is a stone with 'Ao 1724' on it. 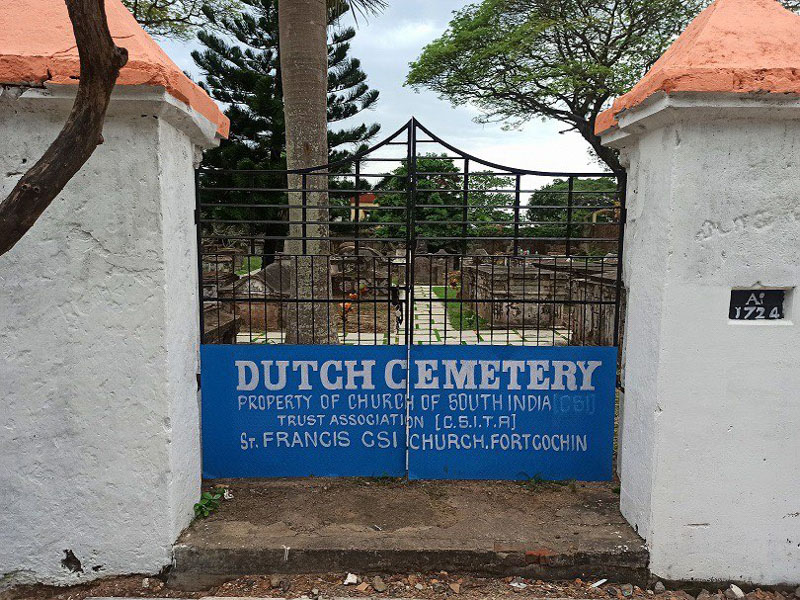 By 1700, the fort's garrison numbered three hundred men, which was actually not enough to defend the fortress if it were attacked by European enemies. However, it was sufficient to repel attacks from the interior. In addition to the garrison, there were, of course, the merchants and administrators with their families and staff who lived in Fort Kochi. It is not difficult to imagine that the tropical climate claimed many victims among the Dutch. Mortality was particularly high among women and children. Where people were buried, except in the church itself, remains unknown for the time being, but apparently in 1724 there was reason to create a cemetery within the fort. Perhaps this had to do with the recurring and sometimes implemented plans to reduce the fort, so that considerable savings could be made on costs.

After the cemetery was put into use, burials continued in the church. However, we no longer find grave monuments from the early period in the cemetery. The oldest dated grave monument dates from 1784. That in itself is not surprising, when one realizes that a grave monument was not affordable for everyone. The funeral was usually paid for from the deceased's possessions or with the last wages. That was certainly not enough for soldiers for a funerary monument. Most soldiers and shipmen who found a final resting place in the cemetery were given an anonymous grave, as was customary for the majority of the population in the Netherlands.

In 1795, the English took over Fort Kochi. The Dutch therefore made relatively short use of the cemetery, but the arrival of the English did not mean that the Dutch disappeared. Just as the Portuguese remained after the arrival of the Dutch in 1663, many Dutch would continue to live in Fort Kochi until well after 1795. Until 1804 there was even just a Dutch pastor who stood on the pulpit of St. Francis Church.

Although the cemetery still has more than 100 funerary monuments in 2020, only 13 grave monuments can be found with a Dutch text or a reference to a Dutch person.[1] Cotton mentions 11 in his inventory, of which 3 after 1800. Barendsen mentions only 9 and Singh 10. [2] 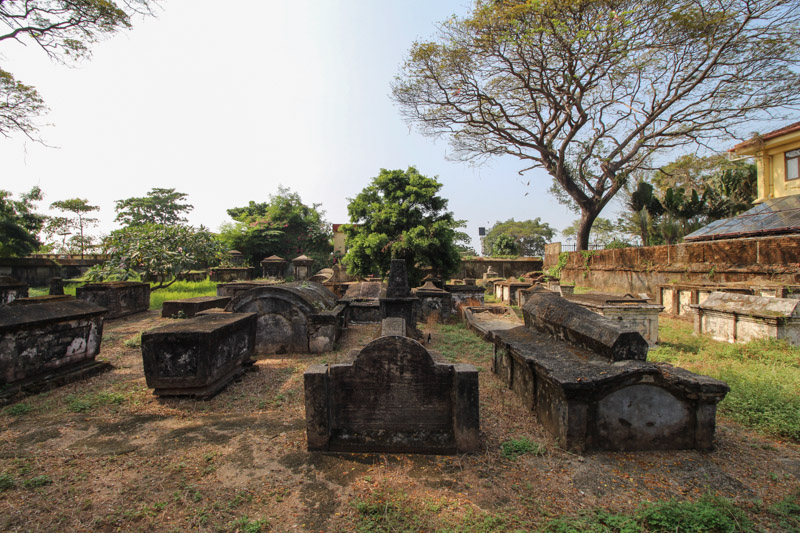 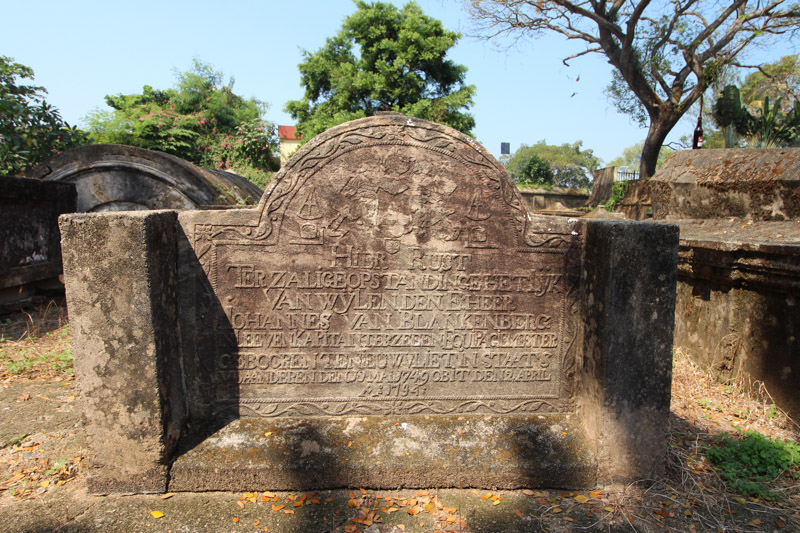 Another striking Dutch funerary monument is that for Aletta Augustus Thiel, wife of Jan Lambertus van Spall, the last Dutch commander of Fort Kochi. She died at the age of 24 in Kochi and her remarkably large tomb was richly decorated. 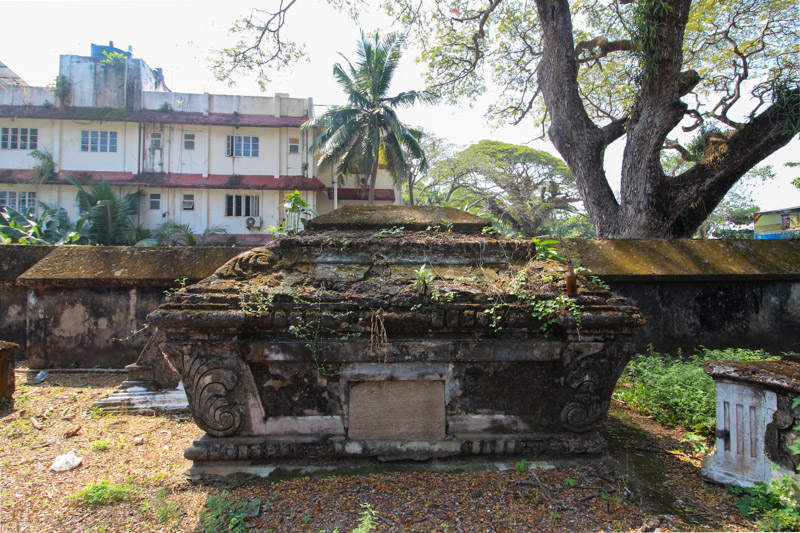 The path system is certainly not original. Tiles are now placed in such a way that a tour can be made around the monuments. 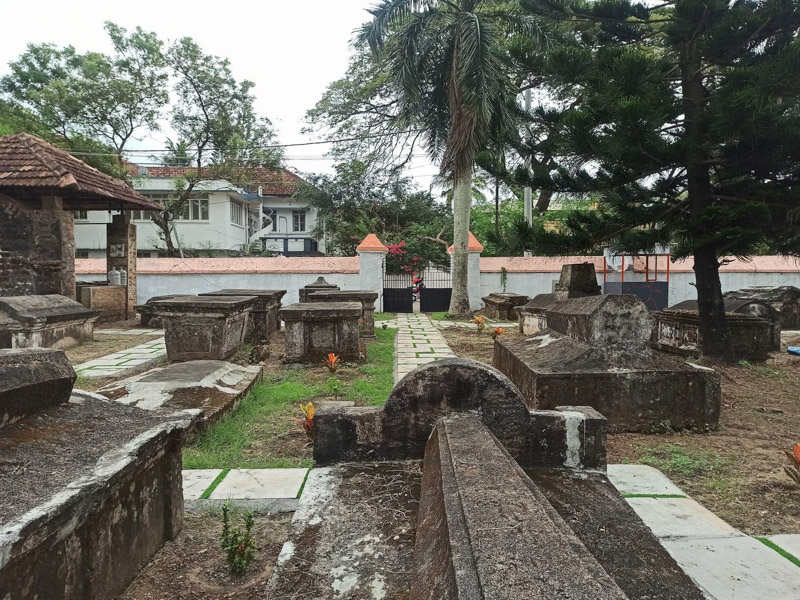 Situation 2021, after the cleaning of the cemetery. (photo Reverend Shinu John Chacko)

The cemetery is owned by the St. Francis CSI Church. In 2020-2021, the cemetery was renovated with financial help from the Dutch embassy with the aim of showing tourists something of the Dutch presence in Fort Kochi. The Dutch foundation Dodenakkers.nl and the Cultural Heritage Agency of the Netherlands have issued advice to the St. Francis CSI Church for the management and maintenance of the cemetery. In addition to the advice, a plan was given for a short informative tour of Dutch funerary monuments and special symbolism in this cemetery.